Cover Reveal: Be My Valentine, Volume One - A Love Africa Press Collection

Welcome to the cover reveal of the Be My Valentine anthology. Valentine stories in all different ranges of heat levels, but all set in Africa. 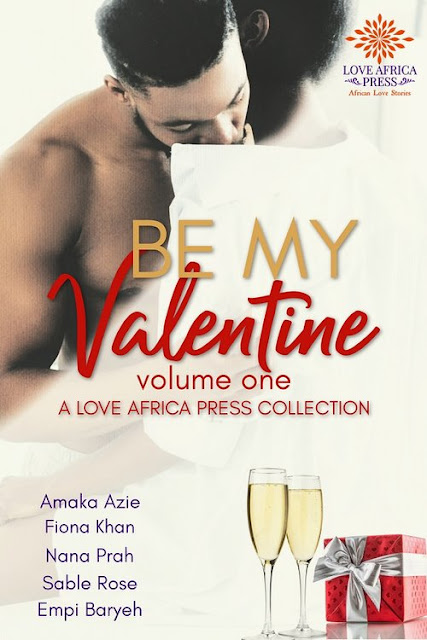 Dive into these five hand-picked contemporary romance novellas and fall in love this Valentine's Day.

Love Africa Press is a publisher that celebrates all things African in genre fiction.
From the Îles des Chiens in Tunisia to Cape Agulhas in South Africa, Santo Antao in Cape Verde to Rodrigues in the Mauritian Islands, our stories take the readers on adventures across the African landscape, whether it is in cities or villages, deserts or jungles, mountains or beaches. No African location or experience is off limits.
We are currently accepting the following: romantic fiction, women's fiction, urban fantasy and thrillers.
Visit our website to find out how to submit your manuscript: www.loveafricapress.com
Bloggers/Reviewers: sign up to join our ARC Club and be one of the first to read our books: www.loveafricapress.com/advance-readers-club

After a very public and humiliating break-up, Yemi Okeke quits her job and accepts the position of Chief Surgeon at St. Andrews Hospital in Lagos. It’s an amazing opportunity to start afresh and get away from all the embarrassment … except, her gorgeous new employer, Vincent Mba, knows all about the incident she ran away from.
Vincent is intrigued by Yemi. She is smart, beautiful, and just the kind of woman he wants to get to know better. But they started off on the wrong foot, and recently heartbroken, she is wary about trusting him.
Society says she is past her prime, and that is just one obstacle thrown along their path. He must find a way to overcome all of that, but perhaps the most difficult task of all? He has to win Yemi’s trust and convince her to give their love a chance this Valentine season.

Amaka Azie writes romance fiction set in tropical West Africa. She explores the beauty and intricacies of the continent in her sweet and sensual love stories.
Born and raised in Nigeria, West Africa, she developed a passion for reading at the age of twelve. Her interest in writing began in secondary school when she joined the press club, and her active imagination has captured the interests of many.
Apart from getting lost in creating fascinating fictional characters, Amaka enjoys reading, painting and travelling with her family.
She lives in the United Kingdom with her husband and daughters and where she also practices as a part-time family doctor.
Amaka was named one of the Most Influential Authors Under Forty by the Nigerian Writers Awards (NWA) for the years 2017 and 2018.

When Dr Aliya O’Henry meets Professor Jack Larrimore, there is an inextricable bond. Baby Star’s arrival brings them together in facing their inhibitions which have been an obstacle in moving forward and finding love. Aliya’s loss and Professor Larrimore’s abandonment, are issues they must resolve before they succumb to the inevitable attraction.
Bitter Sweet Symphony is a sweet romance filled with angst and compassion, the endearment of parenthood and it resonates on the lyrical innocence of love found within the four-part harmony of music. Dr Aliya and Professor Larrimore learn the lesson of never overlapping the past with the future, when the future is a beautiful gift.

Fiona Khan has been lauded with many awards and accolades as an author, poet, environmentalist and in spreading Language, Literacy and Literature. Her short stories, poems and articles have been published in many literary magazines around the world. She has 20 titles to her name and has won many awards over the past 27 years for her leadership and penship. Fiona has written the first HIV/Aids book with emotional intelligence for children, a book that is fully illustrated.
Fiona is the founder of the Global Forum 4 Literacy specialising in free digital and mobile downloads of literature and literacy in many languages, globally. The Global Forum 4 Literacy has now become a brand to be reckoned with as the forum was presented at the UNESCO conference for 2018 as part of the Creative Cities Network and has now collaborated with StoryWeaver in translating books into different languages on a digital platform.

Sena Ewuram’s upcoming travels will take her far away from the man her father saved from his abusive uncle.  The same one who sees her as surrogate sister category rather than a love interest. The opportunity to leave Ghana to further her education should help cure her of those unrequited feelings.
Jewellery designer, Yiko Ayoma, would never betray the man who helped him survive. Falling in love with his mentor’s daughter is something he can’t help but is doing his best to resist acting on. When tragedy strikes on Valentine’s Day, both are tested and must each decide which is more important, their friendship or taking the risk to be more.

Nana Prah first discovered romance in a book from her eight-grade summer reading list and has been obsessed with it ever since. Her fascination with love inspired her to write in her favourite genre where happily-ever-after is the rule.She is a published author of contemporary, multicultural romances. Her books are sweet with a touch of spice. When she’s not writing she’s, over-indulging in chocolate, enjoying life with friends and family, and tormenting nursing students into being the best nurses the world has ever seen.

She’s a big-bodied beauty with weight issues. He’s a dreamy hunk with an unsavoury agenda.
For the first twelve years of her life, Amaka Dilibe lived in an orphanage, abandoned by her mother. Now she has finally achieved success with her home décor business.
Life should be great. Only, it isn’t.
Full-figured Amaka has been the butt of jokes for a long time. Dumped and humiliated by her ex-boyfriend because of her weight, she’s eager for a change.
She enrols in a weight-loss boot-camp owned by Tiago Omole, a coffee-skinned, bearded hottie with a penchant for wearing t-shirts with funny slogans.
Amaka is blown away the first time she sees Tiago. Dreamy. Yummy. Yes, please.
Facing the loss of the business he’s worked hard for, Tiago is desperate too. And when someone presents him with a way out: seduce Amaka and get her to give you money, he is sorely tempted.
Should he do it? After all, it’s just sex, isn’t it?
What could go wrong?

Hi, my name is Sable Rose and I revel in being different. I'm a romance writer and the author of erotic M/F contemporary and paranormal romances and action adventures.
My books feature outspoken, independent and intelligent women who know what they want (and what they don't want), and who are not afraid to make the first move to get their man, if they have to. Their men are always swoon-worthy hunks, each a blend of naughty and nice that women find so irresistible.
My passion is writing and I write only what my characters tell me to write. I write morning, afternoon, night. Who needs sleep? Yes, I'm a writing addict.
In between writing-phew-I also read-a lot. And watches lots of TV and movies. I love dancing, listening to great music and I dream of one day being able to find time to learn both pole-dancing and belly dancing.
I wish...
I adore traveling, and have visited over 15 countries and have formed friendships with people of varying cultures. I use these experiences to craft my stories.
I live in Lagos, Nigeria. No dogs yet. Definitely, no cats...

Ama Sarfoa believes in love, though she hasn’t been lucky at it. She returns to college for a master’s degree after being on the work force for five years. Three chance encounters in one day with a handsome stranger has her entertaining thoughts of him being Mr. Right.
Until he turns out to be one of her professors.
Adinkra Kusi-Andoh has been burned by love before, but his student, Ama, stirs desires in him he’d long given up on feeling again. However, she’s his student and their relationship skirts the fringes of professional ethics. Yet as Valentine’s Day approaches, he can’t help but as her out on a date.
When their budding relationship threatens his career, Adinkra has to choose between saving his career and the woman he loves. Will he give up on love or risk it all for the woman his heart desires?

Empi Baryeh is the award-winning author of Most Eligible Bachelor (Book of the year, 2017 Ufere Awards). She writes sweet and sensual African, multicultural and interracial romance, which happens to be her favourite genres of romance to read. Her interest in writing started around the age of thirteen after she stumbled upon a YA story her sister had started and abandoned. The story fascinated her so much that, when she discovered it was unfinished, she knew she had to complete it. Somehow the rest of the story began to take shape in her mind and she's been writing ever since. She lives in Accra, Ghana, with her husband and their two lovely kids.