Karilyn Bentley will be awarding a $20 Amazon or Barnes and Noble GC to a randomly drawn winner via rafflecopter during the tour. 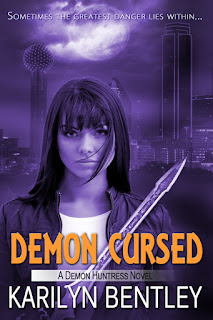 Gin Crawford, the world's newest demon huntress, just wants to enjoy a football game, but finds herself hunting a serial killer minion instead. When his victims turn out to be the local football star’s female fans, she must determine if the player has joined forces with the minion, but her efforts lead her deeper into danger. When her mentor, Aidan Smythe, is attacked, Gin resolves to go to any lengths to save him, even if it exposes her most tightly held secret. Minions and demons, however, aren't the only terrors she faces. Will she realize the greatest danger lies within—before it's too late?

I shake my head at him before straightening my shoulders. And slapping a hand over my mouth and nose. Yuck. Hours-old death in humid Texas weather makes for a smelly situation. At least I’m not the only one with their hand, or handkerchief, over their mouths.

“What happened?” Smythe meets the gaze of each guard and the hyperventilating janitorial women who clearly found the body.

One of the women points to where the body lies in front of the Dumpster, flat on her back, hands resting in classic death pose on her bloody stabbed chest, a red rose clasped in her fingers. Her open eyes stare into the night, her mouth curled into a grimace of pain and death. Her clothes look like she came from a club: tight, short, and low-cut, with spiky heels. At one time, I would’ve been jealous of her hot-to-trot figure. Now all I notice is the pain and terror stamped on her face and the unfurling anger deep in my core.

Effing murderers. I might be a fancy-assed demon huntress, but I destroy minions, not human killers. Lucky for me, I can tell which type of kill this scene belongs to with little effort.

Closing my eyes, I start to take a deep calming breath, think better of it, and focus on activating my minion sensors. Tapping into the power of the entity lying along my nerves, I open my eyes to a tactical grid display of reds and oranges, a clear indication of a minion’s presence at the scene.

Looks like I’ll get my wish to annihilate the bastard who killed this poor woman. 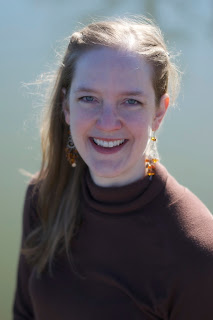 Karilyn Bentley's love of reading stories and preference of sitting in front of a computer at home instead of in a cube, drove her to pen her own works, blending fantasy and romance mixed with a touch of funny.

Her paranormal romance novella, Werewolves in London, placed in the Got Wolf contest and started her writing career as an author of sexy heroes and lush fantasy worlds.

Karilyn lives in Colorado with her own hunky hero, a crazy dog nicknamed The Kraken, a silly puppy, and a handful of colorful saltwater fish.