His Inherited Princess (Royal House of Saene #2) by Empi Baryeh


Prelude to My Review
Before you go any further, please be aware that His Inherited Princess is book 2 of the Royal House of Saene Series of which I wrote Book 1, His Defiant Princess. With that out in the open, understand that I had a fabulous time reading this story because we wrote them as interlinked in some regards, but totally separate. I had to contact Empi a couple of times while reading to have a little “discussion” about what had happened in her book because it took me by surprise, even though it worked perfectly with the story. 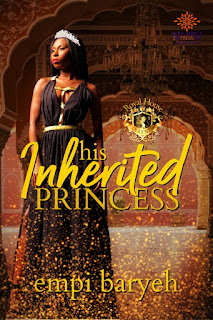 The Blurb
India Saene, Princess of Bagumi, must enter a marriage alliance to save her kingdom from an economic crisis. Tragedy strikes when her husband of a few hours is killed in an accident on the way to their honeymoon. She recovers from a coma two weeks later to discover she has been inherited by her husband's younger brother!

Sheikh Omar El Dansuri has never wanted to be king, nor does he desire a wife. However, when his older brother dies, he not only becomes the future king of Sudar, but he also inherits his brother’s bride through an age-old tradition. Falling for the headstrong India is out of the question especially when evidence points to her as his brother’s killer.
Neither India nor Omar wanted this marriage, but the passion that burns between them cannot be denied. When India’s secret is revealed, will either of them survive the consequences?

My Review
A story of royalty that delivers. Princess India marries one man out of obligation to her family and people. She wakes up after a deadly accident married to her husband’s brother.  The concept of inheriting a spouse seems  extremely traditionalist, even to India who initially married through an arrangement. She ensures that her displeasure is made known, yet is unable to do anything about the new marriage out of an obligation to her country that she isn’t willing to relinquish.

This was an interesting, spicy romance that had me flipping the pages to see how the mystery incorporated into the story would resolve.

Omar is a sigh worthy hero and India is a strong woman who is more than she seems to be. They make a wonderful royal couple who I rooted to be together.

I give this book five out of five chocolate cake shaped chocolate bars.