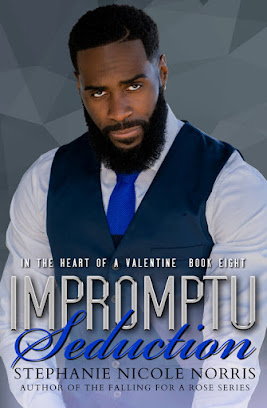 Raised as a debutante, ladylike, and reserved, London Jones has stepped into unknown territory. From the moment her life collided with a man who should’ve been off-limits, a bachelor with a hot reputation—staying out of his way was the sensible thing to do. However, she finds herself caught in a tangled web of passionate fervor whenever he comes near. So much so that her ability to place a barrier between them becomes a futile battle. The heart wants what it wants, and London’s heart yearns for him.

She was the impetus of his desire. The only one who captured his eye for more than a moment and beckoned his soul to blend in beautiful bliss with hers. For software engineer Kyle Valentine, his attempt to hold back the hedonism that struck whenever they were together threatened to be his undoing. His heart yearned to connect with London’s soul, and soon he finds himself questioning if he’s worthy of her love. But now that he’s gotten next to London, determination becomes the motto for his pursuit and his ultimate will to hold on to her, forever. 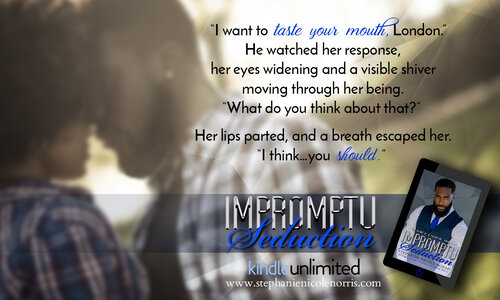 a special gift full of swag from Stephanie Nicole Norris

“About what I said before.”

Claudia shook her head. “Don’t even apologize. I mean, you did come all the way to Brazil because of an invitation. So why wouldn’t you want to spend a night with him?”

London sighed. “So, I’m not crazy then?”

“I’ll tell you what you are. Human. And, if the Valentines are the type of men I’ve seen from the outside in, you should be okay with him.”

“Okay. Really, I only want one night with him.”

Claudia dropped her chin. “I can’t believe you just let that bald-faced lie slip out of your mouth.”

Claudia left her side and returned with two champagne-filled flutes.

“We’ve already established that you like him because of the mileage between here and home, right?”

“So, there’s no need for you to turn around and say you only want one night with him.”

“Okay, but he may not be the several-nights type of guy.”

“You’re right. But say, for a second, birds of a feather really do flock together, then he is a several-nights type of guy, sis.”

“I don’t need this kind of inspiration.”

“Girl, that man wants you like, like…” Claudia thought of her husband, Jaden, and her body responded with flurrying tingles. “Nah, he couldn’t want you like that.” She chuckled.

London’s eyes squinted. “Anything is possible,” she whispered as if knowing what Claudia alluded to.

“You never answered my question.”

“Would you call me a slut if I said I want to fuck him tonight?”

London held her smirk as she stared Claudia down.

“No. This is your ballgame. Play it how you wish.”

London’s smile filled her face. “Honestly, him being the man of my dreams is a wish too cliché to believe in.” London’s mouth dropped, and her lips puckered. “I’m sorry if that let you down.”

“Girl. You’re right to have reservations.”

“I do…want to get to know his heart a bit more. But tonight, I just want to…”

London laughed, and so did Claudia, sipping their champagne and sighing simultaneously.

“That’s always a possibility. But somehow, I doubt it.”

They laughed again, and Claudia emptied her glass.

“Honey, I’m going to call it a night. It was fun, and we have a flight out tomorrow morning. Should I look for you to be in the limo on time?”

“No.” She said it with such conviction.

A smile lingered around Claudia’s lips.

“Yes.” They pulled one another in for a hug. “Thank you for coming all this way with me.”

“Oh, what? A short vacation across the globe, please. I’d do it if it weren’t you.”

They fell into laughter.

“Do you need me to walk you to your room? It’s the least I could do, right?”

Laughter rocked London’s soul, and she waved at Claudia and watched her sashay away.

Filled with amusement, London strolled to the drink table, retrieving another flute. When her eyes landed on Kyle, it was at the same moment that his gaze left his current conversation and traveled to her.

His wink settled in her soul, and biting her lip, she turned and left the room treading back to the beach beyond the ceremony.

Warm grains of sand sank between her toes as she strolled, face to the wind that blew her straight black mane from her shoulders. Pausing, London considered the moon, bright and full behind the dark firmament.

A peaceful ambiance fell over her, and as she took it all in, eyes closed, there was nowhere else she wanted to be.

“You should try falling asleep under the sky. The calm is like no other.”

London bit down on her lip, a heat moving through her system like ignition.

“I was just wondering about that,” she said, twirling on her bare sandy feet to face him.

“And here I thought you were going to say, I know.”

Her smile deepened, but she kept her lips closed.

“Hmmm. What makes you think I would know?”

He took a step forward, close enough that their shadows merged.

“Because you seem like the type of woman to travel the globe, experiencing everything new that is good.”

His smile energized her heart. “It is.”

“Well, you would be surprised to know that Brazil is my first overseas adventure.”

His dark gaze widened, then squinted. “What a surprise. I’ve popped your international cherry,” he teased.

Laughter sprinted from her lips, but it wasn’t just because of his joke, but more so because she was interested in him popping her official cherry.

A flowing river of warmth sailed down Kyle’s body. He’d never kindled so much from a woman’s mere laugh, and her enjoyment lit up her face in the moonlight, turning her into a midnight goddess.

Accessing her from head to toe while she reined in her merriment, Kyle bit his bottom lip, taking careful consideration of the curves in her hips and design of her pretty crafted feet.

Seeing the dark red polish peek from her sandy toenails filled him with hunger. He was a foot man, after all. When he realized he had this fetish, Kyle thought it was a bit unusual. Why would feet, of all things, turn him on with such magnification? But it soon became a beautiful revelation of art he considered given to him by the Creator. The delicacy, intricacy, and originality of a woman’s foot were art defined.

He decided God was showing off by presenting to Kyle what a master Creator He was.

Down, boy, he inwardly warned as his libido began to rise.

“That was pretty funny, Mr. Valentine.”

Kyle’s lips spread into a daring smile. “Mr. Valentine is my father.” He winked, teasing her.

“What shall I call you then, sir?”

He took in an elongated breath. “Be warned, while sir is fine with me, it may get you in trouble, borboleta.”

“I see.” London nodded. “What if I want to get in trouble?” She traced the rim of her top lip with her tongue as her eyes settled on his mouth.

Kyle tilted his head, a smirk lifting the corner of his lip.

“I would say you’re a very dangerous woman.”

She laughed. “Not usually, but tonight, I am feeling oddly precarious.”

Pulling her hands behind her back, London unzipped her dress and peeled the fabric over her skin, revealing bare shoulders and dark honey brown flesh. Before he could stop her, not that he rushed to try, London removed the garment, allowing it to fall to her ankles.

A strapless bikini top and thin bikini bottoms were plastered against her skin. The nude color teased Kyle’s senses, and his nostrils flared, his gaze piercingly thorough as he scanned her body.

He’d been right. She was the butterfly he’d imagined she would be once she shed from her cocoon.

“Careful. While I commend myself for having self-restraint in most areas of my life, this, with you, is not one of them.”

His jaw locked, and London backpedaled, sultry eyes drawing his footsteps forward as she moved.

“There’s no restraint needed tonight, sir. I think we could both stand to get a little…wet.”

A splash of water from the rushing shoreline pushed against their legs. Splitting the button-down shirt he wore with a single heavy-handed jerk, Kyle tossed the garment aside and, just as quickly, removed the pants that were now wet up to his calves.

Desire spilled from their eyes as they held on to each other’s gaze in the torch of moonlight. As another wave coasted forward, they were drenched—Kyle up to his waist, London up to her belly.

Reaching for her, Kyle drew London into his arms, her wet body sliding up the hardness of his regime. Her arms slipped around his neck as their lips crashed together, pulses knocking along with their hearts, his dick, her plum.

Kyle had been more than a drug for London. The type of intoxication she felt under his spell was DUI-certifiable. Still, she thirsted for him to the point of not giving a damn about anything in that moment. Her hips ground, rotating against his hardness, and she shook with desire so splintering, her lungs aspirated from the deep breaths of shared oxygen she took in from his mouth.

“Sir…” she purred, eyes locked on his spearing gaze, “take me as I am.”

Stephanie Nicole Norris is an author from Chattanooga, Tennessee, with a humble beginning. After becoming a young adult, her love for romance sparked, leaving her captivated by heroes and heroines alike. With a big imagination and a creative heart, Stephanie penned her first novel in 2012. She went on to write grin-inducing romance and has been nominated multiple times, receiving three literary awards for Best Series, Best Book Cover, and Author of the Year. As a prolific writer, Stephanie’s catalog continues to grow. Her books can be found on Amazon as well as www.stephanienicolenorris.com.