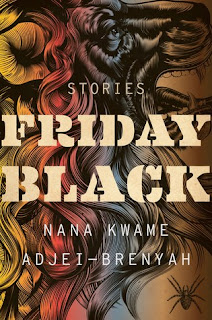 In the stories of Adjei-Brenyah’s debut, an amusement park lets players enter augmented reality to hunt terrorists or shoot intruders played by minority actors, a school shooting results in both the victim and gunman stuck in a shared purgatory, and an author sells his soul to a many-tongued god.

Adjei-Brenyah's writing will grab you, haunt you, enrage, and invigorate you. By placing ordinary characters in extraordinary situations, Adjei-Brenyah reveals the violence, injustice, and painful absurdities that black men and women contend with every day. These stories tackle urgent instances of racism and cultural unrest and explore the many ways we fight for humanity in an unforgiving world.

My Review
An anthology of short stories that both were and weren’t interconnected. The writing was very good. I didn’t care for all of the stories, maybe because I didn’t “get” them, but I appreciated at least one aspect of each tale. Some of the stories made me angry at the situations that the characters were forced to endure. Through his use of speculative fiction, the stories tackle pertinent racial issues.

My favorite stories included:
Zimmerland which left me angry and sad at the state that humanity has lowered itself to. Yet hopeful because the protagonist attempted to evoke a change, even though he wasn’t listened to, at least he tried.

Things My Mother Taught Me was a touching story about a mother who was trying to do right by her child, even though she didn’t have the resources to do so.

Through the Flash was a story I didn’t completely understand the meaning of, but found engaging. The protagonist in the story was a woman infused with incredible strength and speed. She did horrible things with this strength until she changed. Unfortunately we didn’t find out why she became a better person, maybe it is just something that happens when you live a lifetime in an apocalyptic loop that can’t be escaped.  She overcame her external fear only to internalize it: “I’m not afraid anymore. I’m only scared of me.” At any point she could have lost control and regressed to the terror she’d been. Her fear was justified.

I give this book four out of five knife shaped chocolate bars.

I bought my copy through the Ghana Must Read Book Club. It is available at  Amazon