Heather Hiestand will be awarding a $25 Amazon/BN GC to a randomly drawn winner via rafflecopter during the tour. 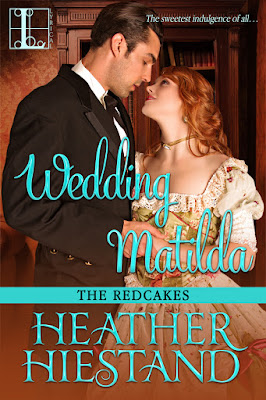 Sugared violets, buttercream…but he craves her kiss most of all…

Orphaned as a boy, Ewan Hales is proud to make his living as secretary to the manager at Redcake’s Tea Shop. But the startling news that he’s heir to the Earl of Fitzwalter changes everything. While tendering his resignation to lovely Matilda Redcake, however, Ewan is struck by her spirit, the luscious bow of her lips—and a realization. Matilda might not marry a working man—but will she wed a future nobleman?

Ewan’s unruly hair and roguish kisses are tempting, but Matilda has far too many problems to consider romance. With sabotage at a cake factory threatening the family empire, she must focus her considerable willpower on keeping Redcake’s from ruin—until she learns that her young son has been kidnapped. Together, she and Ewan must uncover the truth before they can savor the sweet freedom of love…

Matilda saw the fingers of Ewan’s left hand were stained with ink and about to touch his trousers.

“Don’t do that!” She rushed forward without thinking and took his arm by the wrist. With her free hand she whipped a handkerchief from her coat pocket and wrapped it around his inky fingers.

He stared at her, his eyes widening, but the tilt of his lips had turned into a full grin. “Miss Redcake?”

She looked at his face, then at the wrist she held. Her cheeks warmed. “My goodness, I am so sorry.”

He squinted at her until she released his hand, so he could wipe away the ink as best he could. “Motherly instinct?”

She laced her fingers together behind her back in order to remind herself not to touch him. “I am afraid so. Jacob is fascinated by pens, and we have had some spectacular accidents. Please forgive me.”

He shook his head. “Not at all. It was an endearing impulse.”

His smile entranced her: a little crooked, a lot rakish. She felt like some trembling waitress, hoping to be courted by the great Ewan Hales, rather than his business superior. How charismatic he was when he showed his true self. Neither of them spoke until he gave a little shake of his head.

Heather Hiestand was born in Illinois, but her family migrated west before she started school. Since then she has claimed Washington State as home, except for a few years in California. She wrote her first story at age seven and went on to major in creative writing at the University of Washington. Her first published fiction was a mystery short story, but since then it has been all about the many flavors of romance. Heather’s first published romance short story was set in the Victorian period, and she continues to return, fascinated by the rapid changes of the nineteenth century. The author of many novels, novellas, and short stories, she has achieved best-seller status at Amazon and Barnes and Noble. With her husband and son, she makes her home in a small town and supposedly works out of her tiny office, though she mostly writes in her easy chair in the living room.