Spotlight: Whisk Me Up by Zee Monodee #ContemporaryRomance 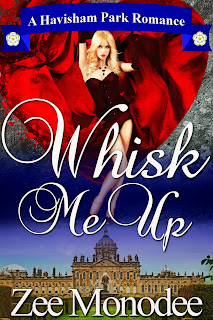 BLURB
After fainting backstage at a fashion week, supermodel Mary Beth Beresford is forced to go into hiding in the sleepy North Yorkshire village of Stonydale in Havisham Park when her sisters kidnap her and bring her there to their late father’s family stronghold so she’ll face the truth - she is anorexic.
Never one to be bossed around, Mary Beth attempts to break out the very next morning...only to land onto the path of the gorgeous, Viking-like pub owner and chef, Niall Barry.
Suddenly, sticking around in this one-horse town doesn’t look like Purgatory anymore.
But Niall is a very private person who shies away from celebrity, and Mary Beth is one of the biggest celebs on the planet. Not to mention that she is an aristocrat - daughter of the late earl and member of the peerage - while he is simply a working-class chef.
Is any relationship between them doomed to collapse like a failed soufflé? 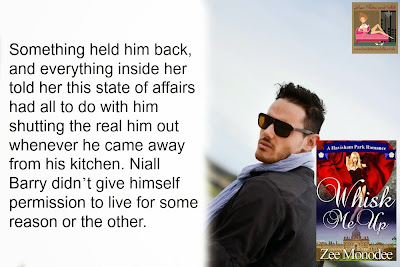 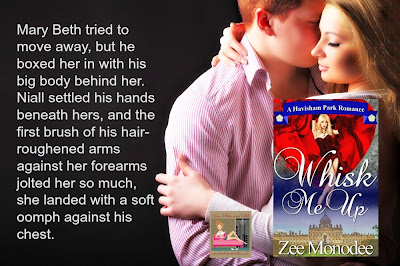 Something about this lass didn’t add up.

She jerked in his arms, and clamped her lips shut before pressing a hand to her mouth. A garbled sound came from her throat and her skin paled, beads of sweat erupting at her temples.

He grabbed her shoulders; to steady her or to keep her in place, he knew not.

“Are you sick? Is it your blood sugar, if you’re diabetic?”
She struck him as much too young for diabetes, but stranger things happened in the world.

“Fine,” she bit out behind her hand and shook her head, sending her ponytail flying.

Early twenties, he’d say. Still a girl. Off-limits for him, being on the wrong side of thirty. He released her.

“You’re not fine.” Could he have growled more if he’d wanted?
She bristled and shrugged away from his touch. “And you’re not my keeper.”

This scrap of a lass wanted to take him on?
Niall drew to his six-five height and towered over her. You could put two like her side-to-side and only then would she match him somewhat in width.

But she poked that pointed chin out and stared him down, even if she appeared on the brink of collapse.

“The saying is, ‘you’re not my mother’,” he threw out in a bid to unsettle her.

She snorted. “Like she ever cared.”
Late teen/young adult rebellion? Hence the druggie route?

Bit of a smart mouth, ain’t she? With his build, blond hair, and Viking ancestry, he’d been compared to the Norse god many a time.

Then her eyes rolled back, and she slumped.

He picked her up again and brought her to the back, into the office, where he lay her down on the worn settee.

“Listen, lass. You almost passed out three times in the past quarter hour—”

“I told you I’m not sick. I came out for a run but got lost and been out longer than I planned.”

“And you set out on an empty stomach, I bet.” Where that certitude came from, he knew not.

“I had a protein shake, okay?” She had the gall to glare at him.
He leaned down and peered into her face. “Don’ cut it with me. You’d need to run mile afore that worked off. Hardly in sweat, are you?”

Fire flashed in her gaze, and she pursed her lips as if to refrain from cursing him, or worse, spitting into his face.

“Stay put,” he ordered as he dashed out of the room and into the kitchen across the corridor. From the oven, he pulled a dish of leftover shepherd’s pie he’d heated up for Anna. Lord knew the woman never remembered to eat. Anorexic at her age; he snorted.
Eeh bah gum. The lass back there? Way too thin. She probably hardly ate a thing.

“Where are you off to?” he barked from the kitchen doorway.
She froze in the corridor. “On my way out.”

“Not afore you eaten summa’.”

Zee hails from the multicultural, rainbow-nation island of Mauritius, in the southern Indian Ocean, where she grew up on the figurative fence—one side had her ancestors’ Indian and Muslim culture; the other had modernity and the global village. When one day she realised she could dip her toes into both sides without losing her integrity, she found her identity.


This quest for ‘finding your place’ is what she attempts to bring in all her stories, across all the genres she writes. Her heroines represent today’s women trying to reconcile love, life, & relationships in a melting pot of cultures, while her heroes are Alpha men who often get put back into their rightful place by the headstrong women she writes. Love is always a winner in her stories, though; that’s a given.

**Find more about the latest on Zee and her works in her monthly newsletter http://eepurl.com/5GULr

**Read about her life & her books at her website/blog http://zeemonodee.blogspot.com/

**Friend her on Facebook (she loves to make friends & meet new people!) https://www.facebook.com/#!/zee.monodee

**Email her at this addy (she loves to talk...prolly too much, even!) zeemonodee@gmail.com

GIVEAWAY
Zee is giving one lucky commenter the chance to name a character in her next book of the series. Just leave a comment on the post and complete the rafflecopter for your chance to win.