Review: Awaken the Dragon (The Legion #1) by A.C. Arthur 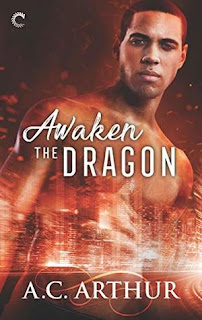 Next in line for the Drakon throne, Theo Masters is the most powerful half human, half dragon in the world. Royal power is the last thing he wants, however. He lives as a human and runs the Legion Security Company. But his new client—a mysterious, beautiful human from a small African village—and the unknown danger she faces may forever change the quiet life that he’s chosen.

Shola N’Gara exists to kill the dark spirit that is attempting to demolish her people. It’s her purpose and her destiny. The gorgeous protector who taunts her with his sexy voice and body is not—especially after he shifts into a magnificent black dragon with turquoise eyes.

A rise in demon activity and the brutal murders Theo’s agents have been reporting start to add up. Someone is making a play, and it’s big enough to change the course of the world as they know it. Now Shola must choose between her destiny and her heart. And Theo must decide if standing by the woman he’s fallen in love with is worth facing his father in a battle to the death.

My Review
A wonderful start to a series that I can see being huge. Theo and Shola’s attraction started out with a spark and ended up exploding.
Theo had suppressed his true nature for a very long time and Shola brought it out in him although he fights it all the way. Theo definitely impressed with his alpha male kick ass skills. And he was a dragon shifter, awesome.
Shola was a strong woman who knew her mission and wouldn’t let anyone stop her. Her objective was lofty, but I’ll admit that there were points in the book where her idea of accomplishing her goal independently, made her seem short sighted rather than brave. None the less, she was a kick ass heroine whose adventure in the Western world had me flipping the pages.
A multicultural paranormal romance that’s a winner!
I look forward to reading about the other dragon shifter who we got to know in the series.
I give this book four out of five pebble shaped chocolate bars.
I purchased my copy from AmazonUK.