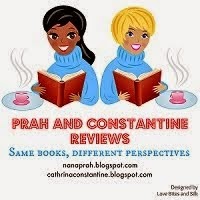 It’s a brand new year. Happy 2015 everyone. To kick of Prah and Constantine Reviews this year we wanted to get rid of a book or two that were on our individual TBR lists. We both had Moonless on our lists and I’m happy to have made the time to finally read it.

I wish reading could be done by osmosis – lay my head on the Kindle and bam- I’ve read a book in ten minutes. I’d have the machine taped to my head.

Remember to stop over to Constantine’s blog to check out her review. 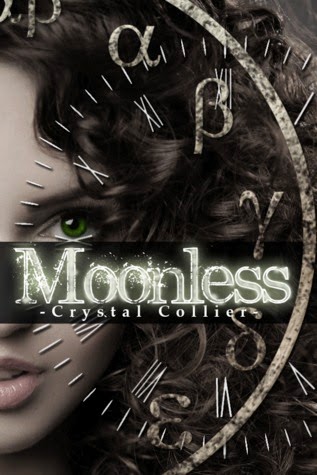 The blurb
In the English society of 1768 where women are bred to marry, unattractive Alexia, just sixteen, believes she will end up alone. But on the county doorstep of a neighbor’s estate, she meets a man straight out of her nightmares, one whose blue eyes threaten to consume her whole world—especially later when she discovers him standing over her murdered host in the middle of the night.

Among the many things to change for her that evening are: her physical appearance—from ghastly to breathtaking, an epidemic of night terrors predicting the future, and the blue-eyed man’s unexpected infusion into her life. Not only do his appearances precede tragedies, but they are echoed by the arrival of ravenous, black-robed wraiths on moonless nights.

Unable to decide whether he is one of these monsters or protecting her from them, she uncovers what her father has been concealing: truths about her own identity, about the blue-eyed man, and about love. After an attack close to home, Alexia realizes she cannot keep one foot in her old life and one in this new world. To protect her family she must either be sold into a loveless marriage, or escape with the man of her dreams and risk becoming one of the Soulless.

My review
I saw Moonless as a YA paranormal with a kind of twist on the vampire story. The Soulless weren’t vampires as such, but they had the qualities of them. The Passionate were awesome people, beautiful, gifted, and mostly kind.

I loved Alexia. A strong heroine who seemed to fear nothing. Sometimes this scared me because she dared to go places she shouldn’t have in order to find the truth. She had to make some hard decisions in her young life and I didn’t admire her for it.

The hero, Kiren, was gorgeous and well…passionate. A hero in the truest sense of the word. The only appropriate word for the romance they shared was, destiny. From the moment they first met (technically not the first) we knew there was something special between them.

For me, if a character has a special power, it’s a plus. Ms. Collier had people with some unique qualities and I loved every one of them (even the naughty one).

There were moments in Ms. Collier’s writing when I thought I was reading poetry. The sentiment she captured was beautiful during these times, giving more of a richness to the story.

One thing I didn’t appreciate, but which didn’t take too much away from the novel, was that questions asked by the characters weren’t always answered directly. It seemed as if it was never an appropriate time. Alexia had to find many things out the hard way, just like the reader. Most of the questions were eventually answered (to my satisfaction), but some are still roaming free. I suppose they’ll be answered in the next book of the series.

I give Moonless five out five clock shaped chocolates.

I’m looking forward to seeing what Constantine thought of the book. Head on over with me and check out her review.
Posted by Nana Prah at 05:00