Tantilizing Excerpt from The Seduction of Miriam Cross by WA Tyson

Today I’m privileged to share an excerpt from The Seduction of Miriam Cross by WA Tyson. 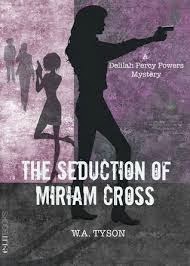 Can Delilah Percy Powers figure out who killed Miriam Cross before she becomes the killer's next target?

Miriam Cross, author, feminist and philanthropist, disappears from her Philadelphia home. A year later, a lonely recluse named Emily Cray is brutally murdered in her bed in a small Pennsylvania town. Miriam and Emily are one and the same. As Delilah and her staff of female detectives - a militant homemaker, an ex-headmistress and a former stripper - delve into Miriam’s life, they become submerged in an underworld of unfathomable cruelty and greed with implications that go far beyond the gruesome death of one woman or the boundaries of one country. Eventually Miriam’s fight for justice becomes Delilah’s own...until Delilah’s obsession with finding the truth may prove just as deadly.

Barb was the first to arrive to the eight o’clock staff meeting.  She walked into Percy Powers wearing nylon sweat pants and a golf shirt, carrying something loaf-shaped and wrapped in foil.  This she put down next to a stack of papers on her tiny desk.
Barb unwrapped the banana bread and sliced it with a knife from the kitchenette.  She arranged the slices on a small platter and set them out on the conference table.
“What’s the occasion?” Delilah said, nabbing a slice.
“Peace amongst the tribes.”
Delilah laughed.  “Good luck with that.”  Yes, it was true that Margot and Natasha frequently argued, but Delilah wasn’t so sure breaking bread together would help.
As though on cue, the two women came into the room.  Margot was dressed in a long-sleeved black cardigan and gray pants.  She carried an oversized LL Bean tote bag stuffed with papers.  Delilah noticed her stiff gate and wondered whether she’d hurt herself again.  Last time, Margot had tried kickboxing at her gym and pulled a hamstring.
Natasha didn’t bother with hellos.  She grabbed a piece of banana bread and stuffed it in her mouth.  Then she pulled up a chair, swung it backwards and straddled it.  She was wearing her signature cargo pants and a sports bra.  Margot gave her an exasperated stare but didn’t say anything.
Delilah sat down.  “We’ll keep this brief.  The Cross murder.  Let’s go through what we have so far.”
Delilah filled the group in on her visit to Miriam’s house in Chestnut Hill.  Barb and Natasha related the details of their trips to Center City.  When they were done, Delilah turned toward Margot.  “Any luck with the online research?”
Margot pulled a stack of papers out of her tote.  “Lots of interesting stuff.  Whether it’s helpful or not is another story.”
Margot passed a set of stapled pages to each of the women.  “Here’s what I was able to find on the Web.  Facebook, LinkedIn, author sites, Publishers Weekly.  I didn’t print out everything, just the stuff that would give us a sense of who Miriam was, what she did in her free time, her work, that sort of thing.”
The women took a few minutes to skim the papers.  Delilah saw lots of stuff about Miriam Cross, the public persona.  But she wanted to know about the private Miriam Cross.  The woman who emerged behind closed doors.  The woman who’d worn the lingerie and dabbled in bondage.
Barb shook her head.  Echoing Delilah’s thoughts, she said, “Facebook pages are unremarkable.  No candid photos, no ranting diatribes, no political affiliations.  We already know what she writes.”
“Actually,” Margot said, “that’s where it does get a little more . . . interesting.”
Margot sifted back through her tote.  She pulled out several slim books, different colors and sizes.  Delilah recognized them from her English literature classes.  Literary magazines, those purveyors of a struggling art form: the short story.
“Miriam wrote short fiction?”
Margot nodded.  “Under the pen name Erica Moss.”
“Emily Cray.  Erica Moss.”  Natasha grabbed one of the books off the pile.  “She had more fake names than my bookie.”
Natasha skimmed until she found the page with Erica’s byline on it and then began to read silently.  After a minute, her eyes widened.
“Did you read this?” she said to Margot.
“I did.”
“This is some heavy stuff.”  She tossed the book to Delilah.  “Check it out.”
Delilah read about half the story.  It was about a futuristic state where women were slaves and a handful of powerful men ruled.  Delilah found it reminiscent of Margaret Atwood–very dark, very ominous, very realistically drawn.  Still, it wasn’t that far removed from Miriam’s main body of work.  “Why publish this under a pen name?”

Margot shrugged.  “I wondered the same thing.  It’s very Miriam Cross, if not a bit darker.  If that’s possible.”

“The graphic sex,” Natasha said.  “Rape.  Humiliation.  If her novels were usually tame, maybe she didn’t want to offend her readers.”
“Good point.”  Delilah checked the date on the magazine.  Two Decembers ago.  Around the time she asked Lucinda to leave the Chestnut Hill home.  “Did she publish any others?”
Margot nodded.  “Six that I could find, all under the pen name Erica Moss.  All had similar themes: hopeless future states where women are subservient to men.  Almost militaristic in their feminist ideology.  As Natasha pointed out, all had almost startling sexual undertones.”
Barb said, “How did you put it together that Miriam Cross was Erica Moss?”
“I found a blog by her agent, Liam McMaster, linking the two names to the same author.”
Delilah sat forward in her chair.  “Did you call Liam?”
“I did.  He hasn’t returned any of my calls yet.”
Delilah considered the date.  “When were the stories published?”

Margot picked through the literary magazines.  “That one you have is the oldest.”  She held up two more booklets.  “The rest came out a month or two later.  And I found a poem online, published under the pen name E. M. Moss.  Last June, I think.”

Barb said, “Around the same time she left Chestnut Hill.”

“Right-o, although she probably wrote it well before.  I called the magazine and they said there is a three-month lag time before an accepted piece is published.”

“Interesting,” Delilah said.  “Do you have the poem?”

“Right here.  I printed it out.”  Margot shuffled through her bag again.  She pulled out a red folder.  Inside was a single sheet of paper.  She handed it to Natasha.  “You read it.”
Natasha sneered.  “Give it to the whore, Sister?”
“That’s not what I meant.  I don’t have my glasses.”
“Sure, that’s why-”
Delilah held up her hands.  “Please.”
Natasha looked back at the paper.  When she spoke, her voice was tight with anger.  “He comes.  I break under his tutelage, a slut, a whore”–Natasha glanced at Margot–“an angel, pure and innocent and so full of need I swell and grow in fury and anger until I am no more.  He fucks me frontward, backwards, and I succumb to the madness.  Like Chinnamasta, split in two, cognition separate from sensation, pleasure entwined with shame.  I know only him.”
When she finished reading, Natasha looked up.  “What the hell does that mean?”
Barb said, “Darn if I know.  Sounds like she was writing with a particular person in mind.”
Delilah said, “Who is Chinnamasta?”
“I looked her up,” Margot said.  “This gets even weirder.  She’s a Tantric goddess.  I read varying accounts, but the bottom line?  She symbolizes both sexual control and sexual energy.”
“Like a sexual awakening?”  Natasha said.
Margot nodded.
Delilah stood.  Now some of this was beginning to make sense.  “Exactly like a sexual awakening.  The lingerie, now the writing.”  She turned toward the group.  “Miriam Cross took a lover.”
“Sounds like sexual infatuation to me,” Barb said.
Delilah’s mind flashed to the scarves and the blindfold, the way everything was neatly and lovingly folded despite the violence suggested by the items themselves, items of bondage.

“But to Miriam,” Delilah said, “a woman who never married, who, according to her niece, was asexual, it must have felt like a loss of control.  A wild, sensual loss of identity.”

Natasha repeated the lines, “Like Chinnamasta, split in two, cognition separate from sensation, pleasure entwined with shame.”
No one spoke.  Delilah thought about Miriam, so full of intellectual curiosity, political ideals.  Who could this man have been?  Very special, indeed, to have captured Miriam’s heart and body so fervently.
Delilah turned to Margot.  “You called this ‘coincidental.’  Why?”
Margot looked from one woman to another, her gaze finally resting on Delilah.  “Chinnamasta is also known as ‘she whose head is severed.’”
Delilah’s looked at her in surprise.  “Come again?”
“The goddess is usually pictured standing on a copulating couple.  But always, she has her own head in her hands.” 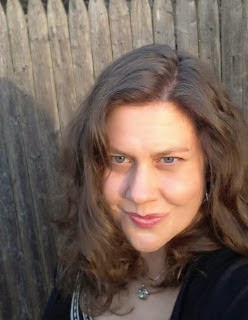 Author Bio:
Wendy Tyson's background in law and psychology has provided inspiration for her mysteries and thrillers.  The Seduction of Miriam Cross, published by E-Lit Books in November 2013, is the first novel in the Delilah Percy Powers mystery series.  She has also authored Killer Image, published by Henery Press, the first in the Allison Campbell mystery series.  Her second Allison Campbell mystery is due out this summer.  Find Wendy at www.WATyson.com.